Sweet Randi Love is the passionate sound of the heartbeat of Soul Music. Sweet Randi Love is a powerful fusion of musical genre. An Ikette Extraordinaire, with the precision training of Ike Turner, her electric high energy blends with exquisite showmanship to create a memorable performance every time. Her powerful vocals unite with meaningful lyrics as she seduces audiences into pleasurable music experiences that bring joyful memories of a performer like no other. Category cannot define her as she moves effortlessly from R&B to reggae, then she slips into Blues with sultry Lady of Soul iconic songs that warm hearts. The strength of her performance is showcased by back-up vocalists and dancers. Stunning costuming showcases her classic, ageless beauty. Breathtaking choreography, performances sizzle with pure energy and music that propels audiences to their feet. The audacious sound of Sweet Randi Love is like no other as it converts audiences to fans.

Ike Turner, the music genius who created a unique style of Rock ‘n Roll, named her “Sweet Randi Love” and made her an Ikette. She toured as an Ikette Extraordinaire for fifteen years, dazzling audiences as the cameras and lights paid homage. Tour life built the professional ethic that defines a true entertainer. She made her debut in the entertainment industry as an aspiring actress just out of college and evolved into an iconic performer. Among her television credits are guest spots on "Doctor-Doctor" & "Kelly -vs. - Kelly" with ABC. She has also been featured in films such as: Lambada, Dolemite 2000 (Rudy Ray Moore) & Heat on the Delta (Kris Lamans). She played lead in multiple plays: Primary Colors, To Be Young, Gifted and Black, A Raisin In the Sun, Glasshouse (David McKnight), and the Gospel Musical Play "Blood Brothers,". She developed the ability to write and produce her own sound. Sometimes raw, sometimes sweet and upbeat, her chameleon style twisted the boundaries of genre classification and made her a name to be honored. She created the “Love Thang Band” with a goal of moving audiences to the dance floor with old favorites and new music. Sweet Randi Love is the entertainer with the power to rise above challenges and design a new age of entertainment.

Sweet Randi Love was raised in the church with a strong Gospel Music background. She began to pursue her musical career in a musical about Sam Cook entitled "Inquest," at the Ebony Showcase Theatre. She toured the US, Europe, & Japan and performed in the club scene around Los Angeles, San Bernardino & Riverside Counties as well as Palm Springs and Several Casino's in Las Vegas. Her recording credits and performances with icons included: Rick James, James Brown, Gladys Horton of the Marvelettes, Luther Ingram, and Kris Lamans of the Platters. She performed with groups including: The Time, The Gap Band, Lakeside, Rolls Royce, and Mary Jane Girls. Credits include touring and recording with legends: Ike Turner, BB King, Solomon Burke, and Andrae Crouch.

Sweet Randi Love is the epic performer bringing electric energy and music that doesn’t let go of emotions long after the curtain goes down. She has a sound you won’t forget. Sweet Randi Love is Old School and New School stirred well.

Link to You tube videos: 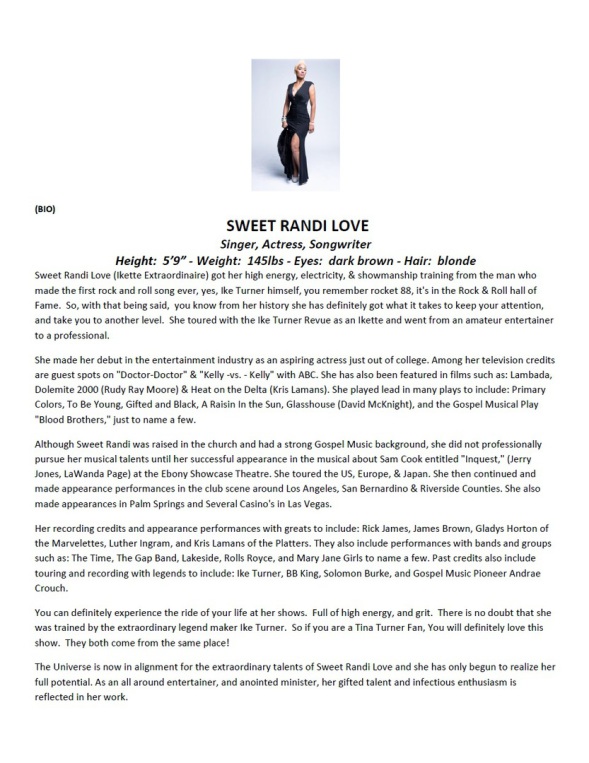 Want to Support the Band?

Please donate to our Benefit Tour!

Email us for information on becoming a Sponsor! contactus@sweetrandilove.com